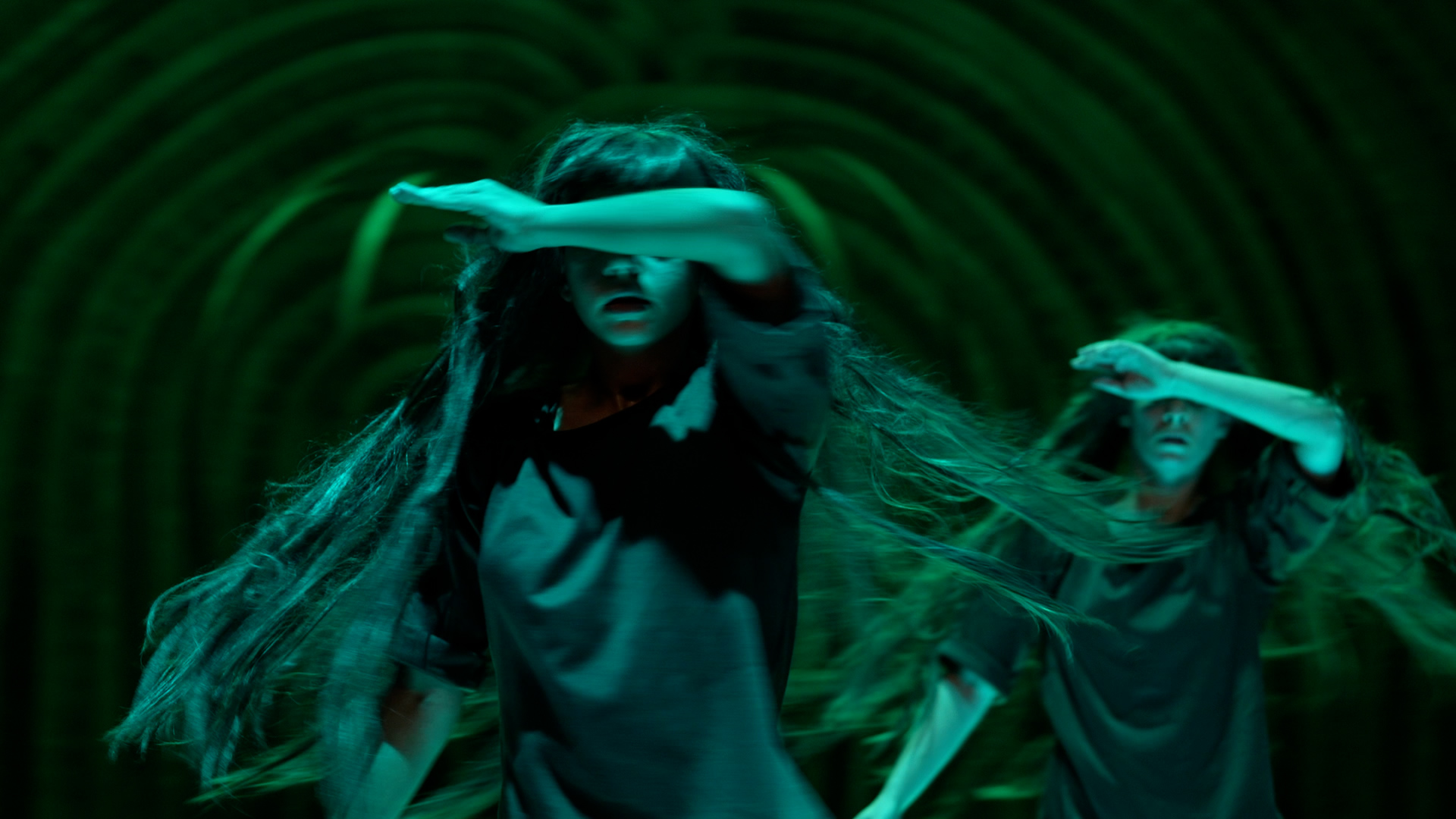 During her two weeks Residency in Vienna Nina Traub will further develope her new work “Mountain”.

“Faintings” is a work coming into being while wandering through landscapes, dreams and mediums. It is the longing for the green of an open space, of mountain depths and the fragrance of water and trees. A fantasy about effortless existence: To be able to speak in long sentences. To go far without asking where. To surrender, to be satisfied, like a mountain, like the sea, like a tree. The work began as a green stain on a black stage and embodies an ongoing creative process that began as a solo, evolved into a duet, trio and now an ensemble of four performers.

Nina Traub’s work moves within the sensitive connection between visual and physical presence. “Faintings” reflects her form of work, in which physicality is composed of rules, structure and order, which are practiced and trained through in-depth process and research. The Movement language is assimilated into images that merge into a cohesive, melancholy and total world.

Different interiors and moods emerge from the handling of the materials. Each material changes the movement and the connections between the people and brings an additional dynamic and unplanned  situations and relationships  into the performance. The things create associations with historical painting, animals, hierarchies, dungeons, labyrinths, housework -things become absurd.

Elisabeth Flunger (IT/AT) is a percussionist, composer and performer, originally from Italy and living in Vienna. She plays improvised and composed contemporary music, works in theater and dance productions, holds improvisation and composition workshops and conceives site- and theme-specific installations and performances. Her favorite instrument is a collection of metal objects that she uses in concerts, spatial installations and performances. She has developed special playing techniques for this instrumentarium and composed a number of solo pieces. www.eflunger.com

Gerlinde Riegler (AT) has completed training as a movement analyst, social pedagogue and social worker and has worked as a social pedagogue and social worker at the Vienna Child and Youth Welfare Service and as a movement therapist in independent practice. For many years she has been involved in dance and movement, contact improvisation and improvisation. She co-founded the Kiskililla Theatre, the group Propeller and the “Damen Improvisation” and worked with Ruben Fraga and Willi Dorner. She is a participant of the Public Performance School founded by Claudia Bosse / Theatercombinat and also works with Hybrid Dessous, Play Vienna and Goldfuß Unlimited.

Meshi Olinky (IL) Born in 1991, dancer, performer and choreographer. She graduated from the School of Visual Theatre and lives in Tel Aviv. Dancer and co-creator in several productions, including with choreographers Nina Traub, Habait Theatre, Guy Reichman. Since 2019 own artistic work. She is a member of “Public movement”, a performative research body (2012-2021). www.publicmovement.org/about/

Tamar Kisch (IL) Graduated from the Maslool Professional Dance Program in Tel Aviv. She is a dancer with the Yasmeen Godder Company. Most recently she danced in the performance ‘Escape Act’ by Alexandra Bachzetsis, which toured internationally. As a dancer she has been involved in numerous productions by various choreographers, such as Willi Dorner, Guy Gutman and Tami Leibovits.

Zoe Polansky (IL) is a composer, sound artist, producer and guitar player. Her music travels between the worlds of Ambient, Electronica, and Post Rock. It was described as a “trip through the geography of musical time” (Ben Shalev, HaAretz, 2017) and as having a “dimension of blurriness and fog yet precise and stylistic”. Like modern music” (Yali Sobol, HaAretz, 2017). Polanski produced three solo albums, the third of which was published in the summer of 2020 by the American label Youngbloods. She composed soundtracks for works of fine art, film, and dance, exhibited sound installations, and played guitar with acclaimed Israeli musicians such as Riff Cohen, Yali Sobol, and Dana Berger. In 2020 Polanski was awarded the Rosenblum prize for performing arts from the Tel Aviv-Yafo municipality in the “Young and Promising Artists” category. www.zoepolanski.bandcamp.com

Kelim – Centre for Choreography is a place for reflection and experimentation, a company and a training centre for choreography. The focus is on courses, workshops and performances that promote research and dialogue between artistic work, artists, audiences and the dance field.
The two-year programme for choreographers includes open workshops and courses for young choreographers and professional dancers.. Communication and generosity are essential aspects, as well as conviction in collective development processes. Kelim encourages and supports collaboration with foreign choreographersand theorists, enriching the dialogue with what happens outside the local arena.
Kelim is a place for creative support for choreographersand artistic processes. Kelim produces work, offers residencies, artistic supervision and performance space. Since 2009, Kelim has fostered a growing dialogue between dancersand critics, between theory and choreographic practice. Kelim sees itself as part of a new wave of self-reflection within the local Israeli contemporary dance scene.
Kelim’s premises are located in a former military hangar, provided free of charge by the city of Bat Yam, located in the south of Tel Aviv, and have been adapted as a dance space/event space.
http://www.kelim.org.il